Many PECO customers facing financial hardship as a result of the COVID-19 pandemic have a new resource to help pay the balance of their utility bills.

The Pennsylvania Homeowners Assistance Fund (PAHAF), helps to support Pennsylvania homeowners due to financial hardships caused by the pandemic. The grant funding can be applied to a customer’s electric and natural gas bill to pay outstanding balances incurred during the pandemic. The maximum utility assistance is capped at 24 months or $3,000. The PAHAF program will also provide help with mortgage payments, property taxes, insurance, homeowner association fees and condominium fees. For more information and to apply, visit the Pennsylvania Homeowner Assistance Fund – https://pahaf.org/.

Sealed electronic bids will be received by Warwick Township, hereinafter generally referred to as the Township, on February 10, 2022 until 10:00 (Prevailing Time) via the PennBID Electronic Bid Management System and opened shortly thereafter.  All documents and solicitation details will be available on or after January 19, 2022 at https://pennbid.procureware.com.  Bidders must register (a free process), then click on the “Solicitations”, then “View” tabs.

The Contract will also include the Asphalt Surface Treatment of two roadways (15,110 S.Y.).

Attachment #1 of PennDOT Proposal and Contract MS-944 (Pages 3, 3A-1 and 3A-2), as well as the “Summary of Estimated Quantities” (Pages 3B-1 – 3B-8), contained in the Proposal and Contract Section of the Contract Documents, provides the quantities for each roadway.  The “Instructions to Bidders” Section describes the bidding requirements under this Contract.

All work and materials shall be in accordance with PennDOT Standards and Specifications.

Proposals must be made upon the forms furnished by the Township, as available on PennBid.

This project is subject to the terms and conditions of the Pennsylvania Prevailing Wage Act, as determined by the Secretary of Labor and Industry and, therefore, must be bid as such.

Proposals must be accompanied by a certified check or bid bond in the amount of 10% of the total bid amount for the work detailed in Attachment #1.

The successful bidder will be required to furnish separate bonds with corporate surety issued by companies authorized to do business in the Commonwealth of Pennsylvania on the prescribed forms dated the date of the Contract, or separate Federal or Commonwealth chartered lending institution irrevocable letters of credit in a form accepted and approved by the Township, each equal to one hundred percent (100%) of the Contract amount, to secure (a) the faithful performance and maintenance of the Contract; and (b) the prompt payment of materials and labor.

Bids must be accompanied by an executed Non-Collusion Affidavit as set forth in the Contract Documents. Failure to submit an Affidavit with the bid proposal may result in disqualification of the bid.

The Award of the Contract, if a contract is awarded, will be to the lowest responsible bidder, as described in the Instructions to Bidders’ Section of the Contract Documents, but the Township reserves the unqualified right to reject any or all bids and to waive any informalities.

The Township also reserves the right to delete any “item” or portion of an “item” contained in the Contract at its discretion, once bids are received.

Prior to awarding the Contract, bids may be held by the Township for a period not to exceed sixty (60) days from the date of the bid opening for the purpose of reviewing the bids and investigating the qualifications of bidders.  During this period, no bid may be withdrawn.

Warwick Township reserves the right to reject any or all proposals.

The bidder who is awarded the Contract may be required to pay “PennBID” a nominal fee.  Bidders are to refer to the PennBID site for the amount of that fee.

2022 Dog Licenses Available at County Treasurers’ Offices; All Dogs Must be Licensed by Jan. 1

Pennsylvanians can now purchase 2022 dog licenses from their county treasurers. State law requires all dogs three months and older to be licensed by Jan. 1 of each year.

An annual dog license is $8.50, or $6.50 if the animal is spayed or neutered. Lifetime licenses are available for dogs that have permanent identification like a microchip or tattoo. Older adults and people with disabilities may be eligible for discounts.

The dog license application is simple and only requests owner contact information and details about the dog being licensed, including name, age, breed and color.

Warwick Township seeks resident volunteers to serve on the following Boards and Committees:

Interested residents should submit a letter of interest and related qualifications/resume to ssorresso@warwick-township.org.

We are pleased to relay that our Warwick Township Water & Sewer Authority approved their 2022 budget with no rate increases.  More information can be found on their website at https://wtwsa.org/

The Warwick Township Board of Supervisors will hold a hearing and consider adoption of the draft of the 2022 Budget at their Public Meeting on November 15, 2021, 7:00 p.m. at the Township Building, 1733 Township Greene, Jamison, PA. The proposed 2022 Budget is available for review at the Township Administrative Office Mon. – Thurs. 8 a.m. – 4 p.m., Friday 7 a.m. – 3 p.m. Written comments may be sent no later than November 8, 2021, to kseckinger@warwick-township.org.

As a result of the damage from tropical depression Ida, Dark Hollow Road will be repaved on Monday, September 13th. 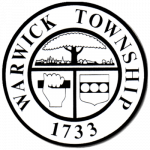